What the heck is a Hackerman?!

Pitch
Codenamed “Hackerman”, this is a game about sneaking through a high-security military base, using only your hacking skills to get through unnoticed.

But what is it?
It’s a 3D first-person game, where you play as a so-called Hackerman, who has to sneak undetected through a base filled with all kinds of security measures. You’ll encounter guards, security cameras, locked doors, lasers, etc.

These things will all be placed, so that it is impossible or at least very hard, to get through without some tinkering. This is where the meat of the game comes in, as you use a Windows-like system to change up the variables on everything. 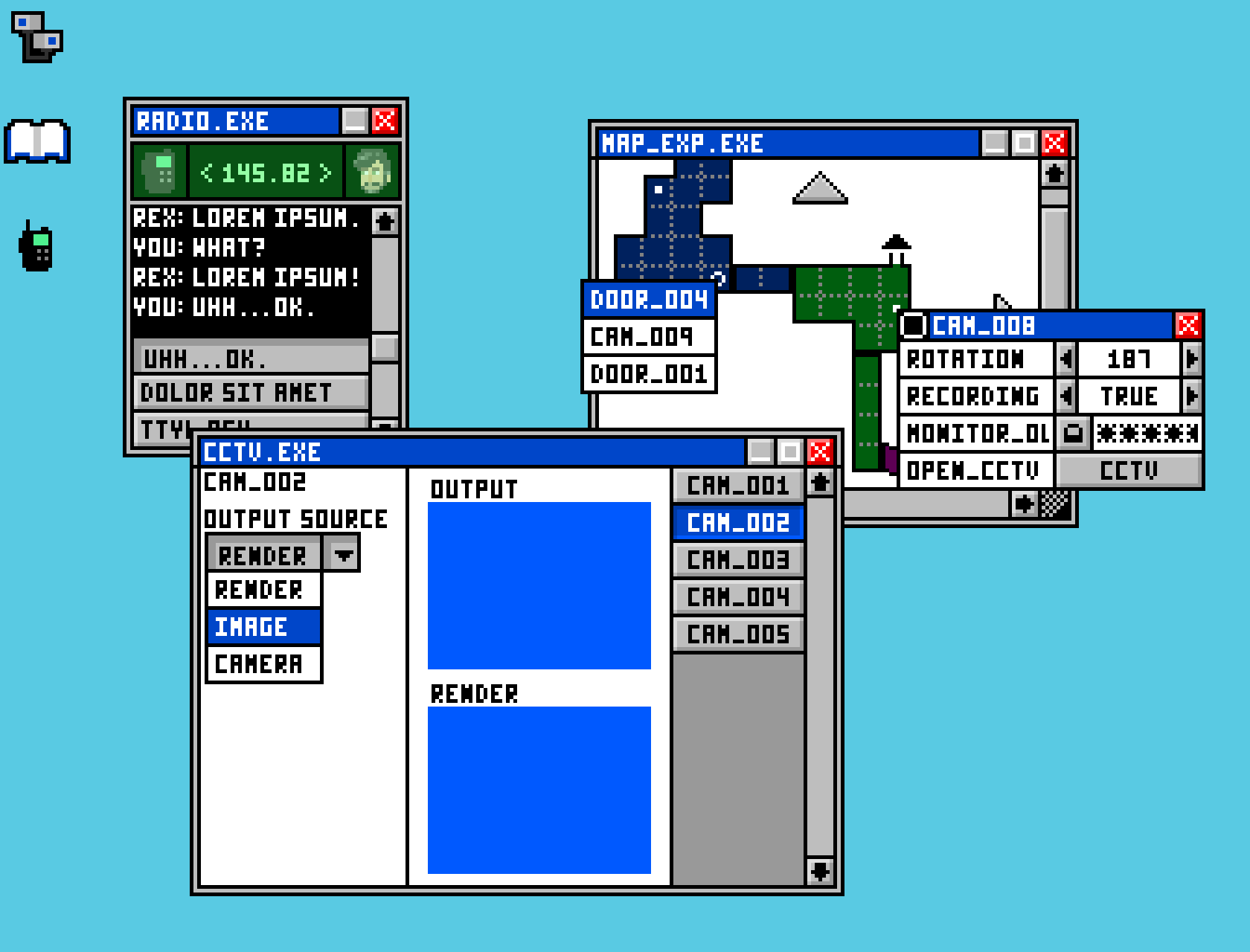 Mock up of HackOS (temp name)

Gameplay
I’m counting on this hacking system working well in conjunction with the games other systems, to create interesting scenarios. Here’s an example of such a scenario:

New areas of levels might be inaccessible due to password-locked doors. In this situation you might hack into a nearby camera, which can then be rotated to look at the keypad. Now just wait for a guard to punch in the code and memorize it.

Prototype phase
I started the project by randomly throwing code at Unity, with no plans or anything. After a long time of only working on the game in totally random sporadic sprees, I had all my main mechanics. I turned my messy project into a tiny demo level and played it.

Messing with cameras through the HackOS

The mechanics played well with each other even with the hiccups, that accompany all prototypes.

Style
The style for the game wasn’t too hard for me to decide on. I’ve been falling in love with PSX graphics and I’ve always been pixelart guy, so of course I had to go with low poly pixely graphics. On top of that it should be a lot quicker to make compared to, say, realistic AAA graphics.

I practiced my 3D modelling skills a bit and made a shader to emulate that PSX style of rendering.

Made a shader that snaps verticies to recreate that PS1 style rendering.#gamedev #indiedev #madewithunity #lowpoly pic.twitter.com/YHT8mJL1B0

I’ve only made the computer (which I copied), so I’ll probably have to hire someone for the 3D. So instead I focused on coding.

Time to start over
Deciding to make the game for reals, also meant I’d need some more future-proof code, since I didn’t want to be messing with my ugly half-assed implementations for the rest of the development cycle.

I started with the HackOS, because it is the most central part of the game. Initially I of course used unity’s own UI-system, but since I was rendering the game at a low resolution, everything looked horribly out of place. There wasn’t really a good way around it, except… making my own UI system, specifically for pixelart, so I did.

This has eaten a lot more hours, than it should’ve, because of the thousands of things, you forget you’re gonna have to spend time on.

I reached a point after 3-4 weeks of working on it (not all the time), that I had to just move on, because the to do list only got longer. Making a pixel perfect UI system is a whole projects of its own, so for now I’m just making do, with what I have so far and then I’ll update a long the way if necessary.

Conclusion
Its been almost a year, since I had the idea originally, but I only started working on it seriously mid-August 2018, so I’m very pleased with my progress so far.

I have about 7 million new game ideas a day, so I’m always scared of the commitment, that comes with big “real” projects like this, but I’m still very passionate about the idea even after all this time.